Skip to content
Previous Next
No reward, no crime

No reward, no crime

To this day, ATMs are subject to attack on a daily basis, leading to significant damage. Banks deploy far-reaching countermeasures that will cause criminals to perform increasingly heavier attacks, resulting in an ever escalating arms race between banks and criminals. In this article you can read how this arms race can be broken, by removing the expectation of a pay-day.

Criminals are attracted to cash money; always have and always will, as long there is cash in circulation. Mid sixties, the first big bank robberies took place in The Netherlands. There wasn’t any security present in bank offices, back in those days. You just walked in; no bars, no bulletproof glass and no security system. Wages were paid in cash every Friday. Not until the seventies, did serious security measures find their way into bank offices: armored glass, an alarm system and alarm trigger switches to notify the police in case of a robbery.

Still, this didn’t stop criminals from robbing banks. In 1990, no less than 400 bank robberies took place in The Netherlands alone. This is when cooperating banks decided to change their strategy. Bank employees no longer had access to large sums of money; they could only withdraw limited amounts for dispensing at the counter. Vaults were equipped with a time delay and that was when attacks started to decrease. Nowadays, there’s hardly any cash present in bank offices. ATMs have taken over this job.

History teaches us that the cat-and-mouse game with criminals can only end if there is no expectation of a reward. This can be achieved by taking away the reward (cash) from the scenario, like the banks did in the seventies, but also by irreversible degrading the cash in case of a robbery. The latter is what so-called cashboxes do, like the one Mactwin developed in the eighties (MactwinBox). The Dutch Cash in Transit industry rallied to deploy MactwinBoxes and the number of attacks decreased drastically.

This time, ATMs are the center of attention for criminals. Where attacks used to predominantly take place with gas (a Modus Operandi that was introduced about 10 years ago), criminals have added solid explosives to their toolbox. The attacks are so violent that not only the ATM is destroyed, but the building also sustains significant damage. Neighboring appartements and inhabitants are at serious risk. So logically, banks are desperately searching for the solution that really discourages the criminals. 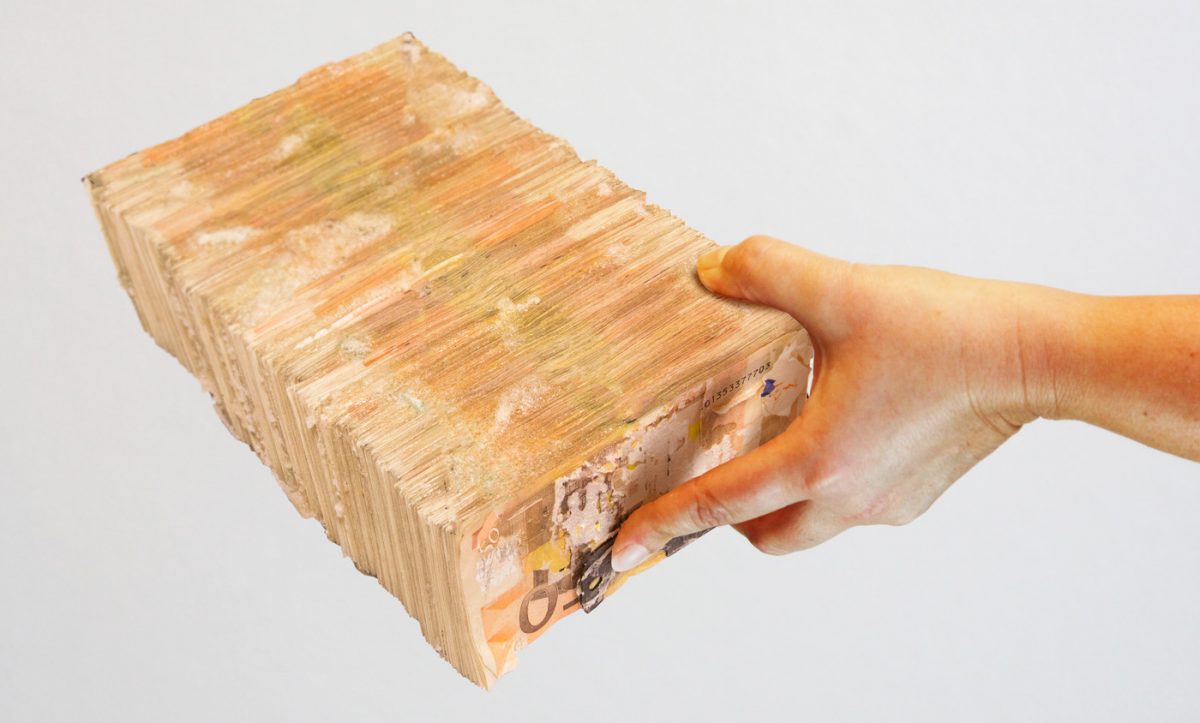 Irreversible cash degradation is the only effective solution

Mactwin believes that taking away the expectation of a reward by irreversibly degrading the cash is the only effective solution to stop this type of attacks. Ink has always been the only degradation method inside ATM cash cassettes, but we have determined that ink is not effective enough. Money stained with ink is still spent ànd accepted…

We are convinced that a banknote is only worthless if the physical properties are irreversibly changed, to such a degree that they won’t ever be accepted as legal tender. In close cooperation with multiple stakeholders in the industry, we have developed a completely new means of degradation for ATM cash cassettes; using glue. Upon an ATM attack, our GlueFusion product glues all cash inside the cash cassette together in the blink of an eye. A so-called brick of banknotes is the result. If anyone tries to peal off a separate banknote, it will tear into small shreds. The custom glue can never be dissolved or removed in any other way, making the degradation completely irreversible. A brick or mere shreds of banknotes will never be accepted by anyone as currency. Nor will they be accepted by automated payment centers. By using GlueFusion, attacking ATMs will be completely futile.

By applying irreversible cash degradation, the number of attacks on ATMs will decrease significantly and will force criminals to look for other targets. We expect their activities to evolve into cybercrime. As a result, organizations will need to invest substantially in their digital defense operations.